English and French, Portuguese, Afrikaans and Spanish with English subtitles 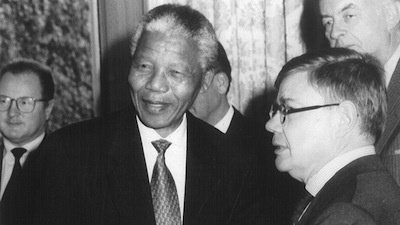 This character-driven historical thriller about the demise of apartheid tells the story of Jean-Yves Ollivier, alias “Monsieur Jacques”, whose behind-the- scenes bargaining was instrumental in bringing about regional peace and the end of racial discrimination in South Africa. Produced by the African Oral History Archive, and the winner of five international awards, this gripping film tells how a mysterious foreign commodities trader with connections to all stakeholders in the region became the lifeline for top-secret contacts. Current or former heads of state – South Africa’s Thabo Mbeki, Mozambique’s Joachim Chissano, Congo’s Denis Sassou Nguesso – plus battle-tested generals, international diplomats, secret service operatives and anti- apartheid icons give dramatic first-hand accounts of the secret negotiations brokered by Monsieur Jacques that eventually led to Nelson Mandela’s release from prison. Later, Mandela would honour Monsieur Jacques.

Stars of Hollywood and the music industry, including Bermuda’s Michael Douglas, feature in this hilariously entertaining portrait of the ultimate Hollywood insider, Shep Gordon. Comic actor Mike Myers makes his directing debut with this outrageous tale of a man who is a beacon in the industry, beloved by the countless stars he has encountered throughout his storied career. Gordon managed Alice Cooper, Teddy Pendergrass, Luther Vandross and Raquel Welch, among many more – and he has the inside stories to prove it. He invented the ‘celebrity chef’, was boyfriend to Sharon Stone, and is friends with the Dalai Lama through his philanthropic endeavours with the Tibet Fund. He is also the guardian of four children. Gordon’s rollicking story is told by those who know him best, his pals, including Cooper, Sylvester Stallone, Anne Murray, Willie Nelson, Emeril Lagasse, Douglas and more.

“A searing look at the role of American evangelical missionaries in the persecution of gay Africans.” – New York Times 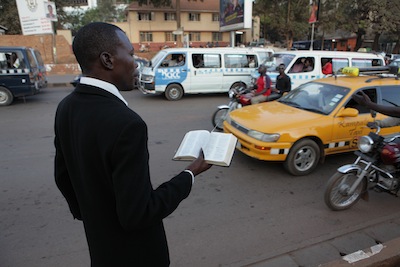 God Loves Uganda explores the role of the American evangelical movement in Uganda, where American missionaries have been credited with both creating schools and hospitals and promoting dangerous religious bigotry. The film follows evangelical leaders in America and Uganda along with politicians and missionaries as they attempt the task of eliminating “sexual sin” and converting Ugandans to fundamentalist Christianity. As an American-influenced bill to make homosexuality punishable by death wins widespread support, tension in Uganda mounts and an atmosphere of murderous hatred takes hold. The film reveals the conflicting motives of faith and greed, ecstasy and egotism, among Ugandan ministers, American evangelical leaders and the foot soldiers of a theology that sees Uganda as ground zero in a battle for billions of souls. Powerful and provocative, courageous and masterfully crafted, the film has won multiple international awards.

“Sometimes, the truth can be more entertaining than fiction.” – Globe and Mail 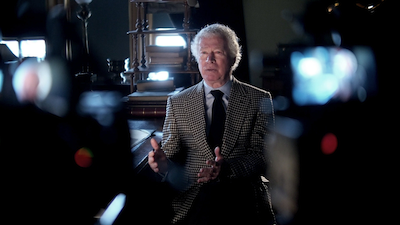 This is the real-life Argo – the true story of the escape of six American diplomats from Tehran during the Iranian Hostage Crisis of 1979. Canadian ambassador to Iran, Ken Taylor (dubbed ‘our man in Tehran’ by U.S. President Jimmy Carter), and his embassy staff hid the six Americans after they avoided capture by protesters who stormed the U.S. embassy. Working closely with Canadian Prime Minister Joe Clark, the country’s Secretary of State for External Affairs Flora MacDonald – and the Central Intelligence Agency – they devised a plan to spirit the six Americans out of the country. The key figures in the daring plot – including Taylor, Clark, MacDonald, CIA operative Tony Mendez, and more – tell a dramatic and compelling story of not only the escape but the covert planning of the military rescue “Operation Eagle Claw”.

“One of the best British documentaries in many a moo-n.” – Evening Standard

Gentle and delightful, this is the remarkable story of maverick organic farmer Stephen Hook and his unruly cows, filmed over four years on the marshes of the Pevensey Levels, East Sussex, England. In an attempt to save his family farm, Hook decides to turn his back on the cost cutting dairies and supermarkets, and instead stay small and keep his close relationship with the herd. However, farmer Hook’s plans to save the farm do not always go down well with his 55 spirited cows, including his beloved Ida. The result is a genial, poignant and compelling story about the bonds between man, animal and countryside in a slice of English life that is fast disappearing. Scenes of animal birth and very mild language.

English and Vietnamese with English subtitles

During the chaotic final days of the Vietnam War, the North Vietnamese Army closes in on Saigon as South Vietnamese resistance crumbles. The United States has only a skeleton crew of diplomats and military operatives still in the country. As Communist victory becomes inevitable and the U.S. readies to withdraw, some Americans begin to consider the certain imprisonment and possible death of their South Vietnamese allies, co-workers and friends. Meanwhile, the prospect of an official evacuation of South Vietnamese becomes terminally delayed by Congressional gridlock and the inexplicably optimistic U.S. ambassador. With the clock ticking and the city under fire, a number of heroic Americans take matters into their own hands, engaging in unsanctioned and often makeshift operations in a desperate effort to save as many South Vietnamese lives as possible. Photo: Bettman/Corbis

Paris has the Louvre. London has the Tate Modern, and New York the Metropolitan Museum. But Husavik, Iceland—a diminutive village on the fringe of the Arctic Circle—boasts the world’s only museum devoted exclusively to the mammalian male, er, member. Much to the relief of his wife, curator Sigurður “Siggi” Hjartarson opened the Icelandic Phallological Museum after first keeping samples in their home. Today, his collection is almost complete – but is lacking a human element. Enter a legendary Icelandic Casanova, and an eccentric American, each of whom offers to help Siggi. Follow Siggi as he races against his own mortality to complete his collection in this often emotional, often hilarious, yet startlingly relatable, story of self-fulfillment and the value of personal legacies (both big and small).

“A chance to luxuriate in the atmosphere of world-class Formula One.” – Village Voice

In 1971, motor racing fan Roman Polanski spent a weekend with world champion driver Jackie Stewart as he attempted to win the Monaco Grand Prix. Polanski was given intimate access to Stewart’s world, both on the track and off. The result is an extraordinarily rare glimpse into the life of a gifted athlete at the height of his powers. The film is pure pleasure for racing fans – an engaging character of intelligence and insight, Stewart takes us on a spin around the Monaco circuit, revealing his exacting race strategy. We also see the track through Stewart’s eyes, thanks to a camera mounted on his Tyrrell race car during a rainy qualifying session. Forty years on, Polanski and Stewart meet once again. In a remarkable post-script, they discuss the sport, both past and present, with a unique and unmatched perspective.

“Crafted with as much care as the wines we see onscreen.” – ABC Radio

Narrated by Oscar-winner Russell Crowe, this stunningly shot and wildly entertaining documentary chronicles the history and changing nature of the French wine industry. For centuries Bordeaux has commanded a mythical status in the world of fine wines as a symbol of wealth, power and influence. Prices for its prestigious red wines have been breaking records with the emergence of an ever-growing Chinese market that is changing the nature of wine in the 21st century. Featuring interviews with collectors, connoisseurs, and winemakers, the film presents an eye-opening exploration of the complexities and unpredictability of the global market and the economic effects and influence of the voracious wine-obsessed collectors of China.  For better or worse, Bordeaux is hitching itself to this new, infinitely wealthy client.

English and Mandarin with English subtitles 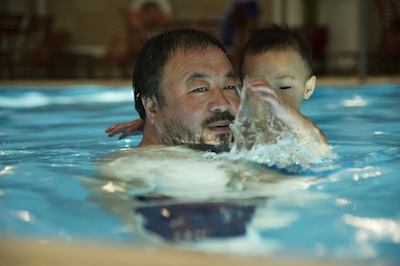 In April 2011, Chinese artist Ai Weiwei was kidnapped by the Chinese authorities. Eighty-one days later he was released, but the unstoppable fighter for freedom of speech was merely a shadow of himself. Filmmaker Andreas Johnsen follows him as he suffers from sleeping disorder and memory loss. Eighteen cameras monitor his studio and home, Police agents follow his every move, and heavy restrictions from the Kafkaesque Chinese authorities weigh him down. On top of it all he is hit with a gigantic lawsuit from the Chinese government, which he soon names ‘The Fake Case’. Picking up where Alison Klayman’s film, Ai Weiwei: Never Sorry left off, this compelling documentary shows the headstrong artist finding new energy to provoke the mighty Chinese powers. As always, Ai Weiwei blends his life and art with politics.

7.15 p.m. – Evergreen: The Road to Legalisation in Washington

“Captures a crucial moment in the history of marijuana activism.” – Indiewire

This is the definitive documentary on Ballot Initiative 502, which made Washington the first American state to legalise possession of recreational marijuana for adults 21 and older, when it went into effect on December 6, 2012. Evergreen captures this historic time, providing a balanced view of the issues surrounding Initiative 502 by going inside both proponent and opponent camps to see how citizens worked to change cannabis prohibition policy. This documentary also serves as a case study to demonstrate how Washington State citizens have dealt with the complex politics surrounding marijuana prohibition. It also explores the local, federal and cultural implications of the first U.S. state voting to approve recreational marijuana possession by a 56 percent to 44 percent margin, and addresses how Washington State got a marijuana reform law passed while Proposition 19 failed in California. Restricted for subject matter.